While it’s walking on well-worn ground in the mining/crafting-adventure space, Core Keeper is a wonderful way to spend some time. Okay, honestly, a lot of time.

I recently saw it climb up the Steam charts, with the latest figure topping 500K copies sold. That caught my eye. But more than raw popularity, I was intrigued by the idea of a game with a bit of Terraria, Stardew Valley, and Valheim in its DNA. Those are three beloved titans, and Core Keeper definitely isn’t on that level, but the comparison kind of fits, albeit with an Early Access caveat to contend with. It’s not finished — but it’s really polished.

Even if we’ve seen these ideas before in other games, this is still the kind of meandering sandbox that I can enjoy losing myself in. You’ll have goals in mind, sure — maybe you want to find a certain ore to craft a certain helmet with a certain perk before facing a boss — but it can be just as easy to pick a direction, any direction, and start tunneling.

It’s pitch dark, so you’ll need to plop down some torches, keep an eye out for glimmering deposits to crack open, and consult your slowly materializing map from time to time.

Early on, I adored this simplicity, even as a solo player. It was ideal for a two-screen PC setup with YouTube or Netflix playing on the side. Toward the end — and admittedly, in Early Access, there isn’t really an “end” — I started to feel tapped out. My character’s level-ups were too few and far between, the enemies and biomes became overly familiar, and the trips back out to the edge of the world took too long even with a minecart.

But you know, I enjoyed those first 12 hours. I don’t regret playing Core Keeper obsessively. 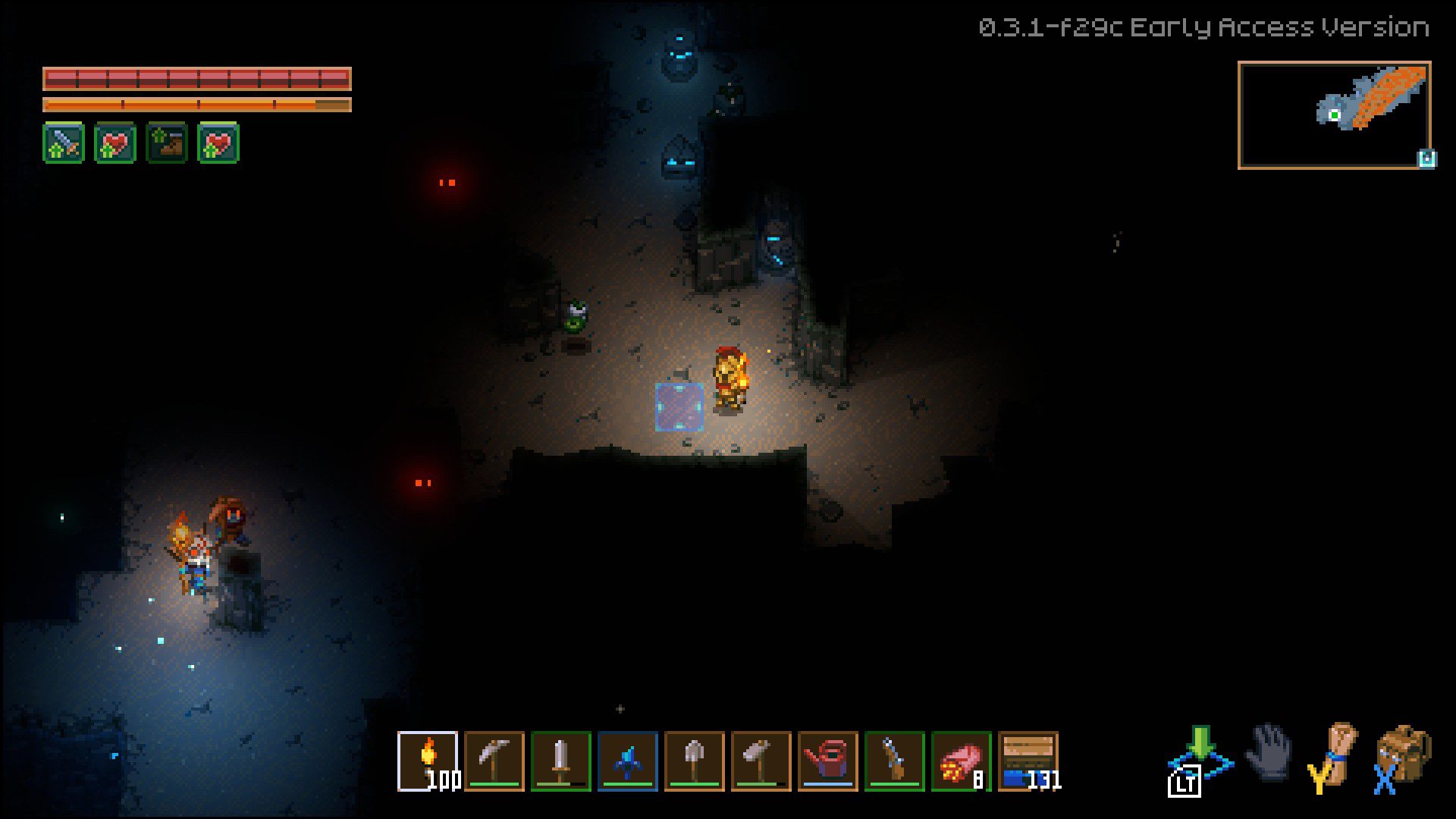 Like other unfinished or content-strained adventures, the early- to mid-game portions are the highlight. It’s best when you don’t fully know what you might find in far-out caverns and the XP-based progression system still has that satisfying pace to keep you glued.

Core Keeper awards experience points whenever you do a relevant action (which I love), so running around will eventually increase your movement speed, and slashing slimes and creepy crawlers will help bolster your melee might. There are skill trees to invest points in, and that goes for categories like smithing, crafting, gardening, and fishing, too.

You’ll start by creating a character with one of several class specialties, though things will even out the more you play, so the choice doesn’t carry as much weight as it initially seems to. For instance, I was a Gardener, which gave me a copper hoe and a watering can right off the bat. If I had known better, I probably would’ve preferred a wearable light source to complement my hand-held torch, but it is what it is. It all worked out.

A short intro sequence vaguely (but enticingly) introduces your ancient underground surroundings, and it’s immediately clear that you’ll need to grow some crops to fend off your appetite, build a base to craft battle-ready gear, and search for three boss creatures. The world has a semi-randomized layout, which lends itself well to Core Keeper‘s tunnel-carving ways. Somehow, punching out holes in the wall is my favorite part. Even though I should be over this gameplay loop by now, it’s oddly satisfying here. And it’s relaxing. 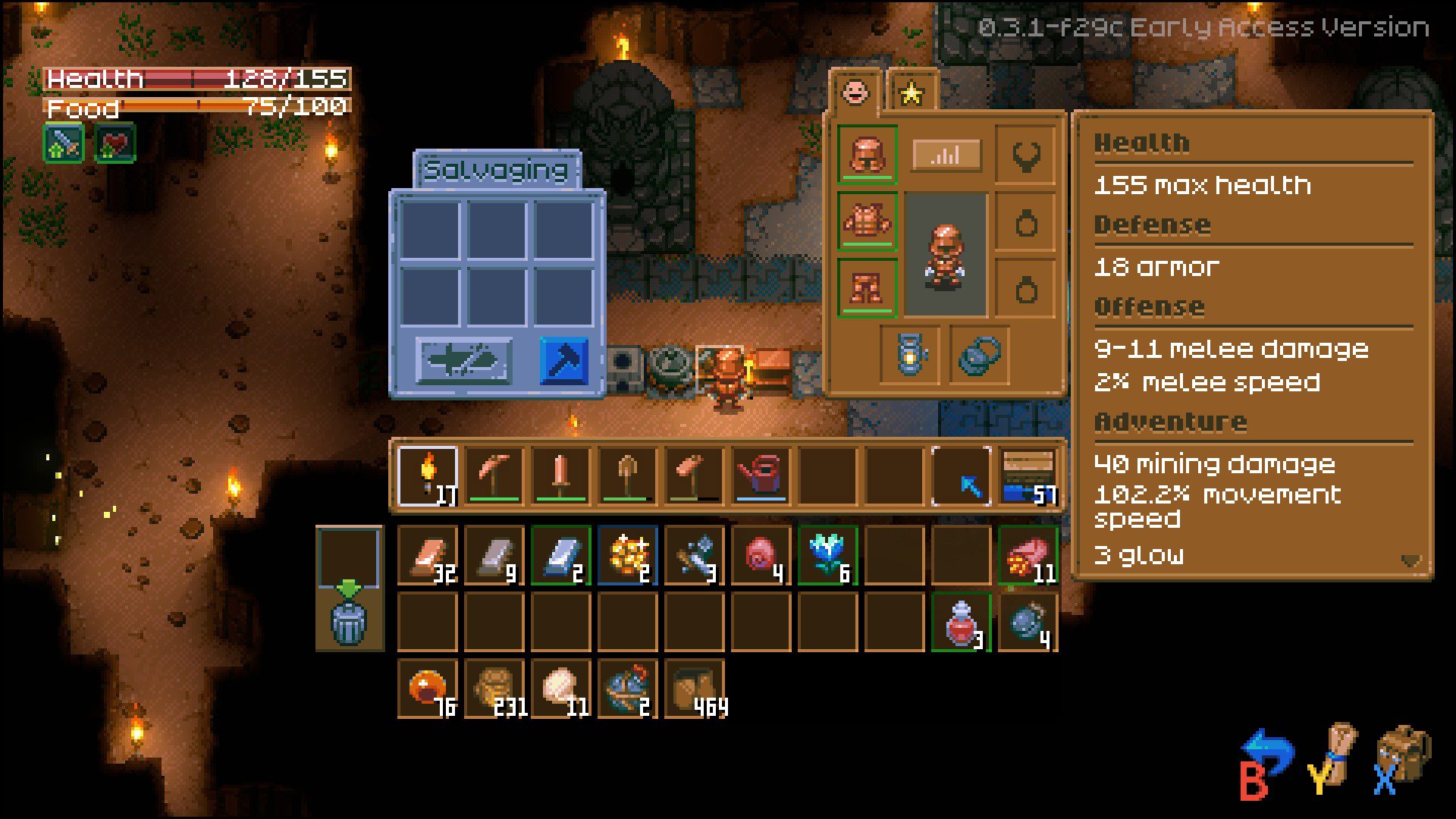 For me, it all works as well as it does because of the nice audio-visual feedback with each swing, and the moody lighting. Again, Core Keeper is really dark when it wants to be, which is most of the time. But you’ll also come across clearings — like a glowing flower-lit river, or a massive chewed-out tunnel that conveniently forms a perfect circle around the game’s starting area — and the lighting-fueled atmosphere hits that much harder.

Snaking my way from one clearing to the next was super fun, even if the actual controls (I mainly played on a gamepad) are so simple. If you’re the type of player who revels in simplicity, this could be your crafting game. It doesn’t get too bogged down with resources or recipes, and the farming/food situation is easy to handle. You also don’t have to worry about nagging in-game days or schedules. And there are no NPCs to fret over yet (just a couple of merchants). The main draw is exploration — that’s the strongest aspect so far.

The melee (and ranged) combat system is fast and hard-hitting, and it gets the job done; I don’t really have any complaints. It’s more enjoyable than swatting down bats and mummies in Stardew Valley, for sure. And the bosses, which you’ll need to physically find (or locate using a scanner), are an adequate challenge. If you die — and you probably will, unless you play super cautiously and are buffed up with cooked meals — then it’s just a matter of running back to grab your items off of your headstone. Depending on the circumstances, though, these treks can be long and arduous. So it pays to come prepared. 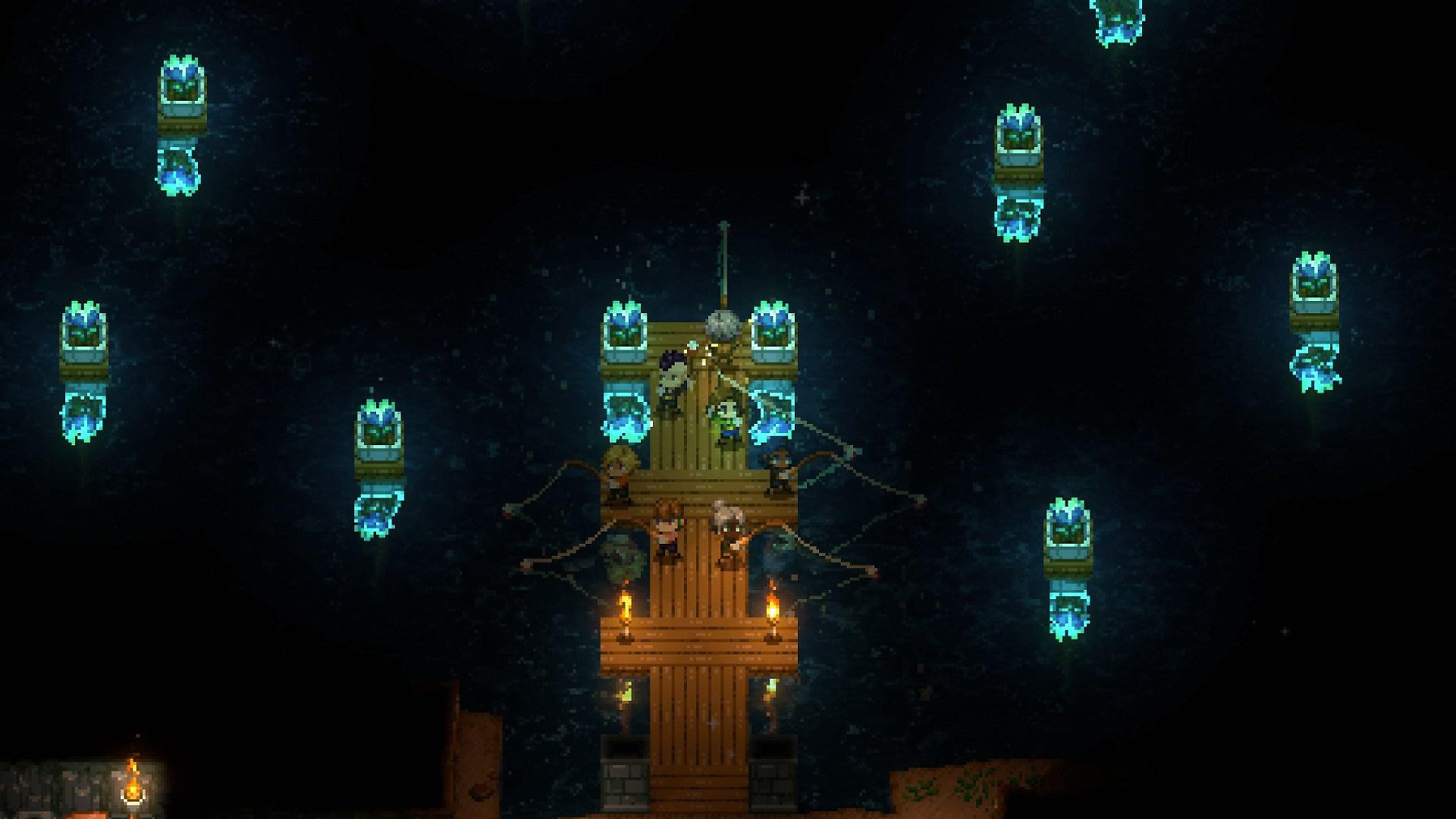 The main issue right now in the Early Access build, and this goes for combat, base building, farming, and a few other facets, is that there isn’t enough variety to sustain a complete-feeling experience. It’s a great value at $13, but don’t let it overstay, either. Just because you can automate rare scarlet ore mining with a drill, conveyor belt, and a robot arm, that doesn’t mean you strictly “need to.” It can feel like progress for progress’ sake.

Most of what’s included feels pretty good — we just need Pugstorm to iterate a bit, balance here and there, and mainly focus on fleshing out the world more. I ended up clearing the three main bosses and then spending a lot of time tracking down the fourth. If you’re in that position, honestly, don’t push yourself too far. It started to become a slog. There are boss re-summoning mechanics (for grinding), but the endgame isn’t here yet.

While I have exclusively played Core Keeper alone, one of its biggest selling points is co-op. There can be up to eight players in the online multiplayer mix, which I’d probably save for a later date. I don’t necessarily think it’s time to go all-in on Core Keeper yet. But if you’ve got a base-building group who’s down to divide and conquer, try it out. Just know that the fun will peter out, and it’s best not to try and exhaust every crumb of content before 1.0.

I’m not convinced Core Keeper can match the quality and scope of its best-in-class inspirations, but it’s already worth a look in Early Access, and if the rest of the pieces fall into place leading up to the full launch, it’ll be fondly remembered. I’m stoked.

[This scoreless review is based on an Early Access build of the game provided by the publisher.]

Jordan is a founding member of Destructoid and poster of seemingly random pictures. They are anything but random.

Why would you go and buy Apple's Studio Display? We did

BioShock is unplayable for Linux users with new update – Destructoid

RUMOR: Nintendo’s history with ‘love hotels’ might be an urban legend